Japanese AV Then And Now | Chapter 5: Emergence of the Alternative Part One

A look back at the origins of strange Japanese AV and how this massive genre of salacious uniqueness came to be powerful in it's own right.

We now look back at some of the crazier genres that have ebbed and flowed in popularity over the last decade of Japanese AV. These are what put AV on the map as the true playground for all things bizarre and weird.

When the Mania Builds...

In the distant past, Japanese AV was dominated by rental-only movies made by major makers in conjunction with NEVA. These productions were pretty bland and a growing chorus of dissatisfied fans of adult video began to build. This was the era where indies Japanese AV companies with their for-sale movies, the rivals of major companies, came into being. The unique tastes of the few gradually moved into the limelight.

With these extreme titles becoming somewhat more mainstream, introducing them in magazines become easier along with finding opportunities to visit their sets. My first time on a set like this was for a paipan production. Hairless AV stars and shaving play is not that rare nowadays, but back during the days of severely restrictive NEVA mosaic, the lack of pubic hair did not make a difference. Indies AV again trail-blazed with laxer standards and introduced productions all around being bare down there.

My first time on a paipan set left me memorized. After seeing a Japanese AV star have her pubic hair shaved, I could not take my eyes off her crotch. I was very jealous of the person doing the shaving. Since you could only see his hand, I'd of liked to do it or at least see more adult video movies use this half-shown 'perverted hand' approach to naughtiness.

Above and Beyond Comprehension

The late 90's were the period when the subculture of unique fetishes were starting to creep into AV by means of indies production companies. The pioneers of introducing unconventional productions into AV were V&R Planning (Translator's note: V&R Planning still produces many titles even today, but going by their website, most involve defecation) and their road movie docudramas.

Until then, coverage of the stranger side of Japanese AV was not common and it was difficult to find information about it in mainstream publications. When it was, the articles on indies AV companies were limited, but V&R Planning was generally the pack leader for magazine featurettes.

If there was one production amongst all others that made for an unforgettable reporting experience, it was this title about insatiable desire directed by Suwa Temple for NOAH SELECT SPECIAL (a sub-label of V&R Planning). It starred Hoshi Morimoto as an amorous woman who had a fetish for the stench coming from men's feet. Her fetish went beyond smelling and including an almost atavistic level of foot worship beyond simple odor appreciation and licking.

Even the socks of her paramours were worshiped as she reverently took them off while smelling them. Her nasal and oral devotion of all things feet continued between each and every toe. Unfortunately, my freshly washed feet did not seem to interest her that much.

Hoshi Morimoto's love for feet extended beyond the studio as there even was an incident captured by a satellite TV station of her going to town on the below-ankle region of men outside by a train station in Tokyo. This all certainly made for an interesting and quite thrilling filming experience and even felt something like a documentary. However, I'm not too sure how big of a user base exists for this type of a production. 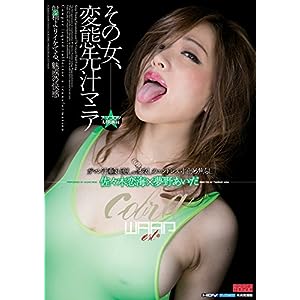